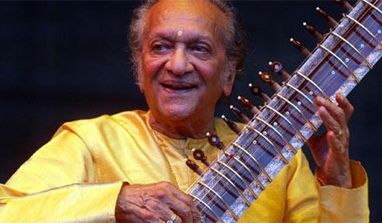 One of the greatest musical talents of our time was silenced Tuesday. Ravi Shankar died at 92.

His was a name I grew up with, a name that made me proud to be Indian at a time when my country was known mostly for human misery.

I read the sad news of Shankar’s death Tuesday evening in The Hindu newspaper and thought back to a time when I was still in high school in Tallahassee, Florida. Ravi Shankar was touring the United States and he was coming to Florida State University’s music school for a performance.

There were only a handful of Indian families in Tallahassee then and not much for us in the way of our culture. It was a rare treat for us to be able to hear the pandit play the sitar.

My mother was especially excited. She sang Rabindra Sangeet and played the taanpura, an Indian string instrument that resembles the sitar but has no frets.

Then came a phone call from the organizers of the Shankar event at FSU. The maestro was sick of eating steak and potatoes and had requested a Bengali meal in Tallahassee. My mother was asked to do the honors.

It wasn’t easy to make authentic Bengali food at home in those days because no stores carried fenugreek or mustard oil. Most people didn’t even know what cilantro was back then.

My mother did the best she could with her stockpile of spices purchased from New York wholesalers. I remember she began cooking days ahead so she could present dinner in Indian fashion — at least seven or eight courses and then several desserts. The Bengalis are known for their “mishti.”

Listening to Ravi Shankar was magical that night. I didn’t understand Indian classical music very well then. In fact, I was not unlike most Westerners who equated Ravi Shankar’s name with George Harrison and the concert for Bangladesh.

The great tabla player Alla Rakha accompanied Shankar’s sitar that night. When they arrived at our humble split-level house for dinner, I was in awe. I couldn’t believe I was sitting at the same table with these musical giants.

Later, I came to appreciate Indian classic music much more. Now I own many of Ravi Shankar’s music as well as that of his daughter, Anoushka.

But my lack of knowledge didn’t matter that night in Florida. Shankar’s music was mellifluous. Like a luscious silk sari fluttering in the wind. Like rays of sun peaking through clouds. It was, as the pandit himself said, music that is sacred.

Read my appreciation of Ravi Shankar on CNN.