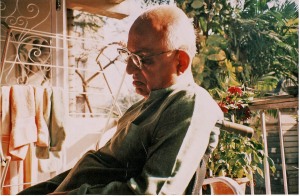 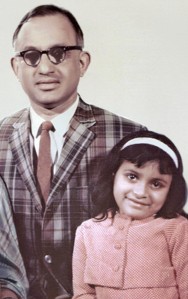 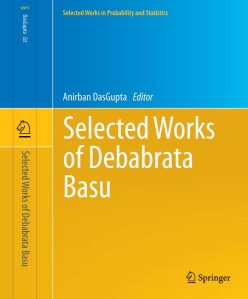 A new book of my father’s writings was released last week. “The Selected Works of Debabrata Basu” was compiled by Anirban Dasgupta, one of my father’s former Ph.D students who now teaches at Perdue University.

Dasgupta wrote in the introduction of the book that he took on this task with a great deal of apprehension. My father was the best teacher Dasgupta had ever had, he said. My father, he said, never used any notes or read anything out in class. He explained everything with effortlessness and clarity that Dasgupta said he never again experienced.

I know this to be true because I sat in on many of my father’s classes. I was not learned enough to understand the complexities of what he was teaching but I could see how at ease he felt with his students and why, they, in turn, admired him so. I never had a knack for mathematics, as my brother did, but I always did well in algebra, geometry, arithmetic, trigonometry and calculus only because my father took the time to sit down with me and explain why things were the way they were.

“Never try to memorize formulas,” he said. “They are a recipe for failure.”

In the book, his former students said my father told them the same thing. I suppose that’s why they all turned out to be successful.

My father was known as somewhat of a radical in the field of statistical theory.

In 1955, he published “The Basu Theorem,” a fundamental tool for proving independence of statistics, said his colleague Malay Ghosh. It is often used in statistics as a tool to prove independence of two statistics, by first demonstrating one is complete sufficient and the other is ancillary.

“The theorem itself is beautiful because of its elegance and simplicity, and yet one must acknowledge its underlying depth, as it is built on several fundamental concepts of statistics, such as sufficiency, completeness and ancillarity.”

Later in life, my father became a Bayesian. In other words, he believed it was necessary to incorporate prior knowledge, along with a given set of current observations, in order to make statistical inferences. “You cannot ignore history,” he would say to me as I proofread his essays, trying desperately to understand the formulas that came interspersed in stories about circus elephants and Martians who landed on Earth.

If you roll the dice a thousand times and it comes up six, then on the next roll, the chance of again showing a six are higher than any other combination, even though pure statistics will tell you otherwise — that your chances of getting a six are still one in six. There must be something going on to influence the roll.

I thought I would remember that the next time i hit Vegas, but I never really understood how my father was able to prove those theories mathematically.

As I skimmed the pages of the book posted on the publisher’s website, I felt incredible pride to be my father’s daughter (the first photo is of me with my father in 1969). I loved him deeply in life but I never took the opportunity to sit down and understand the world of numbers that engulfed my his head.

A decade has passed since my father died of Alzheimer’s, a disease that robbed him of all things, the ability to use his brain. Towards the end of his life (second photo), my father could not talk, could not express himself. I realized that the end was near when I asked him: “Baba (the Bengali word for father), what is two plus two?” He stared vacantly ahead, right through me.

I left his room at our flat in Kolkata and closed myself in mine. It was where all my father’s published works sat on a varnished bookshelf. He had led such an incredible life and I knew that day that I was about to lose him.

I thank Anirban Dasgupta for taking on this book on my father’s work. You are living proof of my father’s genius.