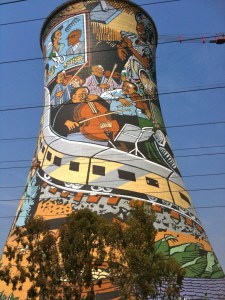 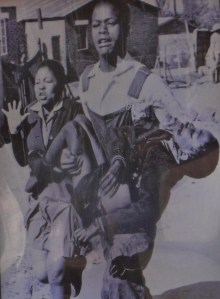 Hector Pieterson was only 12 when he was gunned down — a hail of bullets cutting short the life of a young black boy and triggering what came to be known as the Soweto Uprising against South Africa’s brutal system of apartheid.

On this gloriously beautiful spring day, I stood at a plaza named after him. A stark monument, a museum, a photograph. All around, life goes on in Soweto, still a world away from Johannesburg, just like it was when Hector was a school boy.

I was a little older than Hector when he was killed. I only learned about him when I entered college, protested apartheid, marched for divestment. Read about Nelson Mandela and Steve Biko.

On June 16, 1975, students were protesting the use of Afrikaans, the language of their oppressors, as the medium of instruction in schools. When police opened fire, Hector fell on the corner of Moema and Vilakazi streets. Sam Nzima captured a black and white photograph of Pieterson’s limp and bloodied body being carried by a fellow student.

I stood now in that very spot with Nathaniel Mudau, a driver who works for CNN in Johannesburg. He insisted we have a photo taken in front of the memorial. So we did. A teenage boy named Karabo snapped the photo and printed it out on a battery operated printer.

Nathaniel showed me around Soweto, where he grew up, where his family still lives. We stopped for lunch at Ethel Maria’s. She grills chicken and beef in her front yard and serves them with salads, rice and porridge mostly to local policemen, teachers and nurses.

Ethel Maria has lived in her two-room shack in Soweto since 1965. She still doesn’t have running water inside the house. Life is still a struggle for her, 16 years after a black-majority government finally took power in South Africa. At 51, Ethel Maria does not harbor hope in her heart anymore.

Maybe it will be different for her children but freedom has meant very little life changes for her. Freedom did not give her a bigger place, respite from work seven days a week

On top of a makeshift grill, she made the best chicken I tasted in South Africa. After the meal, everyone at the table shared a wet towel to wipe our hands and paid her $4 for the meal.

Then Nathaniel took me around Soweto. I’ve posted photos here of the murals painted at a power plant and the shanties that still dot the landscape.

In the days of apartheid, black people were forced to live here. Many awoke at the crack of dawn and spent a fortune on a rickety old bus that took them into Johannesburg for work. Now, downtown Johannesburg is apocalyptic. Abandoned by whites, the wealth has been sucked dry and the one-posh apartment buildings and skyscrapers have stood still in time.

Nathaniel made me put up the windows to the car in neighborhoods like Hillbrow — the crime there makes the most violent parts of Atlanta look like paradise.

Life is much calmer in Soweto. But hard still for most of the residents.

“This is the way my house was then,” said Ethel Maria. But back then, she did not have her Nelson Mandela apron, the one she proudly wears every day when she cooks in her front yard.