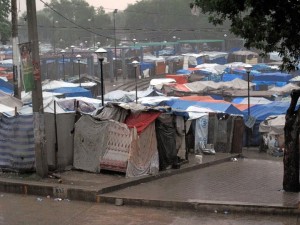 It rained heavily in Port-au-Prince tonight.

I stood in the balcony of the Plaza hotel — the exact spot from which Anderson Cooper broadcasted his show in January — and looked beyond. At the Champs de Mars, the city’s central plaza that is now home to thousands of people left without anywhere to go after the massive January 12 earthquake.

I thought about what the rain must feel like under a flimsy tent or plastic tarp, water seeping in from every direction. I watched as people tried to close shut the entrances, some of them just thin cotton sheets or blankets. Suddenly, the constant noise of the street came to a halt, replaced by the thud of monstrous drops falling hard from the sky. And the laughter of gleeful children cooling off after another scorching day.

The water started building along the roadside and I knew that in many of the camps, dirt had turned to mud. I was at the Petionville Golf Club earlier in the day, where resident Vital Junior had told me how treacherous the place becomes when it rains. About 50,000 people are living on a hilly nine-hole golf course at the once-swanky club for the elite. From its perch, the club affords a beautiful view of the city on a clear day. So many of Haiti’s elite must have sipped cocktails in the clubhouse and looked down on those below.

Now, the view was marred by human misery.

From the Plaza balcony, I ran back to my room, wet from the few short steps through the hotel’s open-air courtyard. What must it feel like to have no shelter from the elements.

I listened to the rain; reminded me of the monsoons in India. I knew more was on the way for Haiti — May starts the rainy season here.

And people who have already suffered too much will suffer some more.

One Reply to “The rainy season”