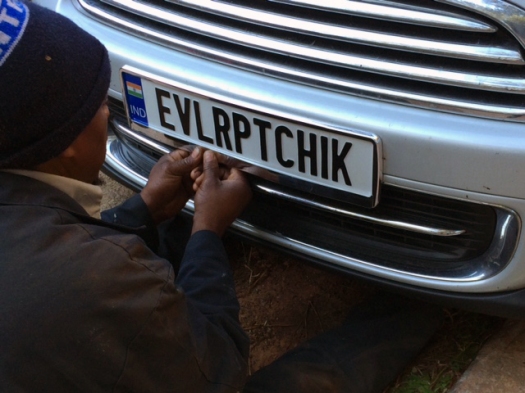 My friend Val gave the coolest birthday gift: a vanity plate for my Mini Cooper that says an abbreviated form of “EVILREPORTERCHICK.” So on Sunday, I went about trying to get it mounted on the front of my car.

Val and I stopped at an AutoZone on Memorial Drive only to learn that the store does not do any installations. I was disappointed but not for long.

“What do you need done?” said a man in the checkout line.

We showed him. He said he could do it. Wouldn’t take but a few minutes. If we wanted, we could follow him to his auto shop just down the road.

“I’m in the convertible Jag,” he said.

Sure enough, he climbed into the forest green Jaguar. I’d say it was circa 1980 or so. We followed it to a small house that looked like it was stuffed with things inside and about to fall apart on the outside.

Then he closed the gate to his back yard, teeming with junky cars and trucks. I looked at Val, wondering why Rodney felt compelled to close the gate. No one could see us anymore. What if Rodney turned out to be a troubled man?

But he wasn’t. Not really. 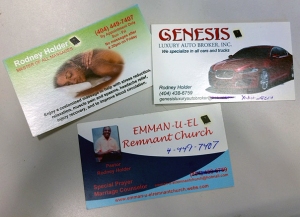 He told us how he was a preacher at the Emman-U-El Remnant Church. He does “special prayers” and marriage counseling, according to one of the business cards he gave us. He said he traveled all over the world as a missionary. He’d just been to Ethiopia.

Another card advertised Genesis Luxury Auto Broker, Inc. And a third said: “Rodney Holder, Master of all Massages. By appointment only.”

Whoa. I could have had him tackle my neck ache.

Instead, Rodney drilled and screwed and within minutes, my vanity plate was firmly attached to my Mini. He wouldn’t say how much we should pay him but we gave him a $20 — for his labor and the conversation. It was certainly the most interesting afternoon I’ve had in a while.

Whether it’s a auto repairs or soul searching or back pain, keep Rodney in mind. He’s a jack of all trades and apparently, a master of a few.