I had a dream last night. It was the same one I’ve had since August 20, when I learned of Jim Foley’s death.

A man in black holds a small knife in his left hand. He is too cowardly to show his face. But he holds up Jim’s face. For the world to see.

I have been told that if one uses a small knife for such a brutal method of execution, it is an excruciatingly painful way to die. Not like the guillotine; not like a heavy blade making a clean chop.

I dream this every night. I have dreamed it before. After Daniel Pearl’s murder in February 2002 by al-Qaida mastermind Khalid Sheikh Mohammed.

I do not understand people who wish to kill journalists and aid workers. I hope I will never understand them.

I know this: that if my dreams are so troubling, then how traumatic are these acts to the loved ones of those subjected to such heinous acts? I cannot imagine.

Some Muslims in that part of the world have told me that no less heinous acts happen in America each year. Murder in the most chilling fashion. Rape. Assault. Torture. Grisly crimes that make headlines — and some that do not.

But one act does not beget another. One crime does not justify another.

Jim was a journalist who cared. So was Steven Sotloff. David Haines dedicated his life to the betterment of others. How many more innocents will be killed in this horrific way?

Will Alan Henning be next? His friends pleaded with the Islamic State of Iraq and Syria, better known by the acronym ISIS, to let him go. But the men who make up ISIS do not know the meaning of compassion. They make al Qaida look mellow.

I will see Jim Foley in my dreams tonight. Again. I am sure of it.

And, in the morning I will again awake saluting his courage, saluting all those who put themselves in harm’s way for making this world a little bit better.

Give to the James Foley Legacy Fund. 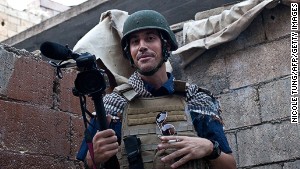 2 Replies to “Death, dreams and dread”