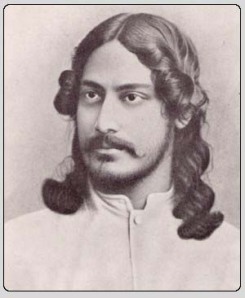 I made it through Mother’s Day. I thank birthday celebrations for Rabindranath Tagore for keeping the tears at bay. Well, most of the time, anyway.

My mother died 10 years ago. At her memorial service, we honored her with the work of Tagore, who had been such a big part of her life. He won the Nobel for literature in 1913, the first non-European to be bestowed that honor.

This is what the Nobel site says: The Nobel Prize in Literature awarded to Tagore “because of his profoundly sensitive, fresh and beautiful verse, by which, with consummate skill, he has made his poetic thought, expressed in his own English words, a part of the literature of the West”.

His words were magical, especially when they were sung. My mother went to music school, studied Tagore, even made a record.

As long as I can remember, she sat on the floor with a harmonium or, when we were abroad, at a piano, belting out her songs. She taught me Rabindrasangeet (the songs of Tagore) from an early age. For that I am glad, though I was impatient then.

In 1982, my mother suffered a massive stroke that robbed her of her ability to sing. Still, she tried. She sat in her seat in our Kolkata flat with a cane by her side and a Geetobitan (a book of Tagore songs) on her lap. She even organized musical sessions at our house and invited singers to our house.

This week, India and Bangladesh are celebrating the 150th birthday of the great Bengali poet.

Ma, I miss you so much. Not even Tagore, I think, would have been able to capture in words my sadness on Mother’s Day.