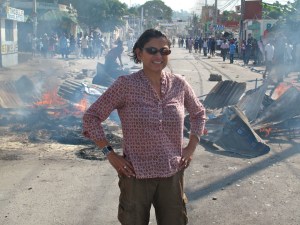 I have been covering the post-election fallout in Port-au-Prince, Haiti, where people tell me they are fed up with a government that has failed to deliver.

This year alone, Haiti has endured a massive earthquake, a hurricane and a cholera outbreak. They say they can’t take that their will not be respected now. They say the November 28 presidential election was rigged; that Jude Celestin, the government-backed candidate, did not win a place in the runoff.

Many favor Michel Martelly, a popular and flamboyant Kompa singer known by the monicker of “Tet Kale,” which means bald head in Creole.

The city was tense Wednesday after many hours of protests. People set buildings and tires on fire. They used the concrete rubble from the earthquake to block the streets and torched Celestin’s campaign headquarters.

Here are two pictures of me covering the story for CNN. You can read it on http://www.cnn.com

One Reply to “Protests in Haiti”