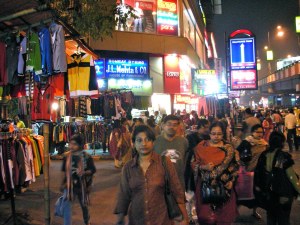 The taxi refused to take the Eastern Bypass — too dangerous in the wee hours of the morning before the sun comes up and lights up the despair of Kolkata. Instead, we took the old route from the airport in the northeastern part of the city to the south.

I had not taken these old roads in a while. But as a little girl, when life was harder, but oh, so much simpler, we traveled to the airport this way and stood on the “viewing deck” to see planes take off and land. It was a rarity then. Flying seemed so exotic, so other-worldly. Now, all I do is complain about sitting in cramped seats as we pass over oceans and continents.

At 3 in the morning, the city is finally quiet.

The thousands and thousands of street stalls and stores (like the ones in this photo of a shopping area near my house) are shuttered. Those who can afford it are sleeping soundly in the comfort of air-conditioning. Most are under whirring ceiling fans that bandy the humidity about — or nothing at all.

The heat has fallen after months of the monsoon, but after the glorious autumn weather in Atlanta, I feel hot. Restless.

I had not expected to pass by the flat my parents called home for so many years. I have returned to Kolkata this time to finalize its sale.I thought I would not have to see it until later.

But instead, we pass by the front gate, the taxi driver unknowing of the burst of emotions within me. I try hard to hold back the tears. I feel them welling. I don’t know whether to look or not. But I cannot control my glance.

I peer at the gate through which the taxi might have driven had Ma and Baba still been here. Ma always stayed up for me, no matter how late. I’d walk in through the front door and see her in her wheelchair, her eyes heavy with sleep would light up instantly at the sight of her only daughter.

She’d have tea ready for me. Maybe a snack. My bed would be made up with fresh sheets, a clean towel hanging in the bathroom.

There is no one waiting for me now.

The taxi driver carries me away from that moment of intimate familiarity to another place. A friend’s flat, perfectly comfortable but with the sting of loneliness. Daylight breaks early here; by 5:30 the city is springing to life again. But for me, today, everything is dark.

One Reply to “Coming home”