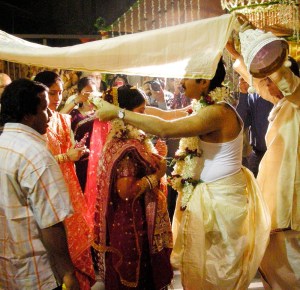 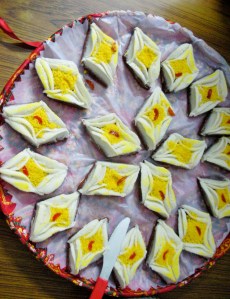 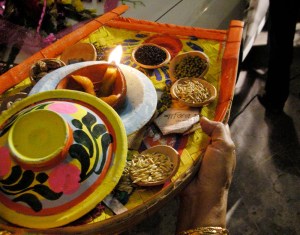 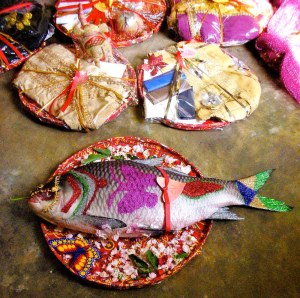 Members of the younger generation in my family think differently than did my grandparents. Many of the centuries-old traditions and rituals are falling away as young men and women adopt a more progressive — and often more gender equitable — outlook toward life.

But one thing that remains constant are the intricate ways of a Bengali Hindu wedding.
My cousin’s daughter, Shoma, had been planning her wedding for months. I arrived early on the morning of December 2 for the remaining five days of festivities. That afternoon, family members blessed the bride (many with 22 karat gold jewelry in hand) in a ceremony known as Aai Budo Bhaat. It’s also a bachelorette party of sorts and several of Shoma’s friends showed up later in the evening for a dinner party.
The next day, the women of the family grind turmeric with a mortar and pestle and anoint the bride with the paste. This allegedly brightens the complexion and makes her skin glow on her wedding day. It’s a messy affair, leaving women with stubborn ochre-stained nails.
There are numerous pre-wedding rituals. What they have in common is food.
With each ceremony, the family gathers for an elaborate feast, which for Bengalis is incomplete without a spectacular fish preparation. Often the fish is saturated with mustard paste and steamed inside a banana leaf.
Then there is rice. Lentils. Fried puffed breads. Roasted eggplant. Medleys made with vegetables we never see here — red pumpkin, bitter gourd, and greens and beans that I couldn’t even name in English. Mutton curries and savory chutneys.
And, of course, the sweet stuff — the other thing that have made Bengalis famous. Sweet curd, sandesh, rasagollahs, malai chom choms. (Pictured here are some sweets that arrived from the groom’s family. The photo of the fish, a Ganges carp, was sent along with other gifts as an offering of goodwill from Shoma’s family to the groom’s household.)
By wedding day, I swore I could not eat another morsel.
Shomas’s family greeted the groom, who arrived in a flower-laden car with a large entourage. Shoma’s mother blessed him with a bamboo tray containing an earthen lamp, husked rice and trefoil (see photo).
The actual ceremony, oddly enough, is often not even witnessed by guests. Astrologers set the time for the nuptials and sometimes, it’s in the middle of the night! Luckily, Shoma’s was in the evening and people did gather around the marriage platform, though few really understood the Sanskrit mantras the priest was chanting.
Shoma looked like a princess, a blanket of gold around her neck and chest and the henna on her arms hidden by filigreed and bejewelled bangles. Even her tiara was solid gold.
Bride and groom exchanged flower garlands (see photo). The end of her maroon brocaded sari was tied to one end of his perfectly pleated and ironed white muslin and silk.
Shoma and her groom, Bishan, sat on front of a fire to chant mantras after the priest. They took seven rounds around the flames. Agni, the god of fire, is the divine witness to the union.
Shoma and Bishan will be living in Istanbul, where he has a job with a bank. The rituals performed on a hazy Kolkata December night will soon become as distant as the moon.
I was glad to have witnessed the actual ceremony for once. It reminded me of what an ancient land India is. Steeped in tradition. And it made me ponder whether the next generation, consumed with McDonalds and Macintoshes, will still foster such ceremony.
And then, I, who was determined not to fill my belly once again, did just that.