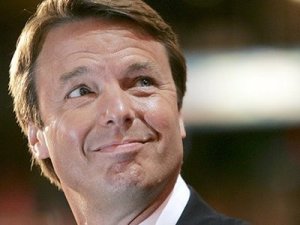 In the summer of 2004, when word came that John Kerry had tapped former presidential rival John Edwards as his running mate, I climbed into my Honda CRV and drove fast and furious up Interstate 85 from Atlanta to Edwards’ hometown of Robbins, North Carolina.

It took me about five hours and by the time I arrived in the small town, downtown businesses were shuttering for the day. I had hoped to speak to local folks about their boy made good.
Instead, I drove to Edwards’ parents house, where Bobbie and Wallace Edwards invited me in. Johnny’s about to be on CNN, they said. Do you want to stay and watch with us? You drove all this way from Atlanta? Are you hungry? Would you like to eat supper with us?
I was amazed at how down to earth they were. How humble. How gracious.
I had been covering Edwards for the Atlanta Journal-Constitution during the campaign. After he won the South Carolina primary, I hopped aboard his campaign plane and traveled with the handsome man lauded for his populist message. He was the son of a mill worker, after all. His heart was good.
I was impressed not just by his parents but by his wife, Elizabeth. She and John married in 1977 and had weathered the loss of their son, Wade, who died in a tragic car accident.
When I interviewed Elizabeth, she recalled how she met John when they were both law students at the University of North Carolina at Chapel Hill. How on their first date, they went dancing and John kissed her gently on the forehead. She was taken by how sweet he was.
After all these years, she was his ballast.
Then came loss for Kerry-Edwards in November, 2004. And the announcement that Elizabeth had been diagnosed with cancer.
Through it all, everyone thought that Edwards had a terrific chance of occupying the White House one day. Until the wretched story broke about his affair with Rielle Hunter and whether he had fathered her daughter.
Details about the sordid sex scandal are still emerging but one thing is quite clear: John Edwards, once the sunshine of the Democratic Party is shrouded in darkness forever. His political career is finished and a New York Times story last week documented how he largely lives in seclusion these days.
Neil Lewis’ story makes Edwards out to be the epitome of narcissism. Some of the comments made by his former aide are shocking. Check out Lewis’ account of the rise and fall of Edwards at http://bit.ly/1aDPOV
It’s sad to read such stories. I had believed in Edwards’ integrity when I wrote about him. He was electric, well-loved. Reporters found him genuine, refreshing. It was invigorating to cover his campaign.
Now, I feel betrayed.
What else did Edwards lie about?
I think about his parents — such simple people who must now see their son disgraced in such a public manner.
And I wonder: How could he do this to Elizabeth?