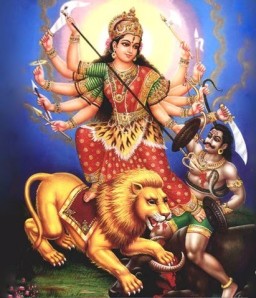 Thousands of deities are on their way to the banks of the Ganges in West Bengal today. The immersions have to be finished by Wednesday in the capital, Kolkata.

Ma Durga, the goddess of strength, returns to Ma Ganga, the holiest of rivers.

In the next few hours, murtis or images made from clay, wood, paper mache, bamboo, straw, shell and sand will begin dissolving in murky river waters.

Durga Puja, the biggest Hindu festival in my home state, is culminating this week.

When I was young, Durga Puja was the highlight of my year. Like an American kid looking forward to Christmas.

The five-day festival usually falls in September or October, depending on the position of the stars. We were off from school for several weeks. The streets were filled with fun and food. We wore new outfits for each day of the puja and went from pandal to pandal (temporary structures that housed the images) to see which one was the biggest, the baddest.

Hindu mythology tells the tale of Durga this way: Only a woman could kill the demon named Mahishasur. So the gods got together and each gave a virtue and skill to create the ultimate warrior, the goddess of strength. They gave Durga 10 arms so she could carry weapons in each to slay the Earth’s evil.

And so she did.

As I grew older and Kolkata became more congested, Durga Puja became somewhat of an inconvenience. The crowds, the road closings, the heat, the rain, the mud and muck of the dwindling monsoons. Last year, I almost missed my flight back to Atlanta because it took so long to weave through city streets to get to the airport.

The 15 million people of Kolkata all seem to be out together during Durga Puja. The constant banging of the dhol (drums) and blaring Bollywood music deafens my ears. At the end of every street, on every corner and in the neighborhood parks and schools, clubs fight for best in show. Who will win the prize for the most attractive Durga display? Some images are realistic. Others abstract. Some simple, others so ornate they would make Marie Antoinette gasp.

And when the five days of worship are over, throngs of people parade down the streets behind a lorry carrying their neighborhood Durga to the Ganges, so she can return to the heavens.

Whether you get into the Hindu puja spirit or not, there is something awesome about seeing millions of people fall at the feet of a woman to worship her strength, especially in a country like India, where women still have a long way to go to gain equal standing with men.

Last year, I was walking home from the bank and I stood and watched workers put the finishing touches on their Durga display. The beautiful and mighty woman, steely in body and soul (and loaded with weapons to boot!).

I stared into the eyes of the image. And felt her strength recharge me.

Check out this Web site for more information on the ceremony, rituals and story behind Durga: