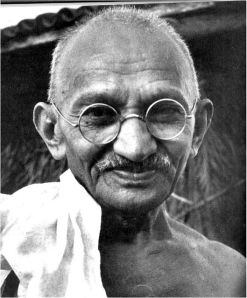 I know several folks who were born today. They share their birthday with one of history’s greatest men: Mohandas Karamchand Gandhi. Otherwise known as Mahatma, the great soul.

Check out Google today and you’ll see the familiar profile. Round glasses, balding, round head, ears to rival an elephant’s. Walking stick. Dhoti, the white muslin worn by men.
A new four-volume book translated from Gujarati comes out today. I am looking forward to acquiring a copy.
There has always been debate about Gandhi’s non-violence tactics and civil disobedience in India, which ultimately led to freedom for millions from the tyranny of British colonialism but at a great cost. More than a million people died crossing the borders between Islamic Pakistan and predominantly Hindu India. In the end, Gandhi’s critics said, independence was not non-violent, but downright bloody.
Was Gandhi right in trying to beat a master not with physical strength or ammunition but by stronger will — and courage?
Martin Luther King Jr. thought so. He adopted Gandhi’s practices to make America’s civil rights movement.
In my home, Gandhi was a hero. My father, a deep-thinker, a pacifist, revered Gandhi’s teachings, his spirit. I grew up staring at an oversized black and white photo poster of Gandhi in our house. It still hangs on the wall at my flat in Kolkata, one of the few embellishments left there in the years since my parents died.
Gandhi lived a simple life of purity and protest. In the end he was gunned down by a man who failed to understand him. Someone who bore the kind of hate that Gandhi devoted his entire life fighting against.
Whether or not you agreed with Gandhi’s political strategy, you can’t help but admire his everyday practice of ahimsa — an important tenet of the great Eastern religions of Hindusim, Buddhism and Jainism. Do no harm and speak the truth. Always.

One Reply to “Gandhi Jayanti”